A special encounter - meeting Lucy Wood and TO6411 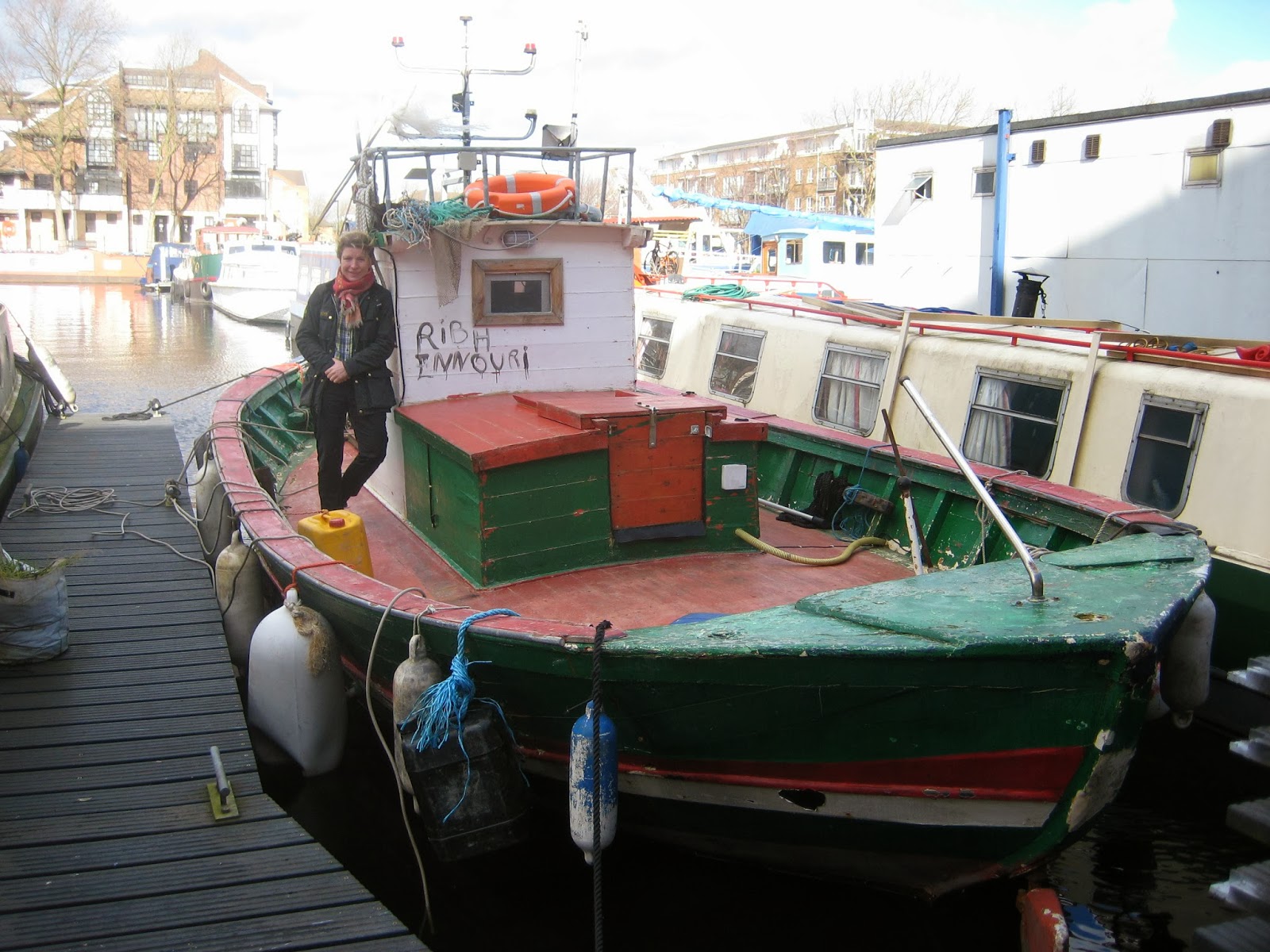 On Friday the 21.02.2014 I finally had the chance to meet Lucy Wood and TO6411. In bright sunlight I made my way to the South Dock Marina lock office. While waiting, one man of the harbour staff stopped to ask what I was looking for. When I explained whom I wanted to meet he nodded understandingly. "I haven’t seen her this morning.” Apparently the artist and her project are well known at the local port.

The conversation with Lucy Wood turned out to be a real revelation and a great pleasure. Planned as a humanitarian project, the performance piece “Lampedusa to London” is not positioned in the realm of the art world especially, nor is it supposed to be political in an explicit sense. The aim of this was to bring together as much people as possible and to not drive those away who are sceptic or frightened as soon as they hear the word ‘political’, which might remind them of (dangerous) protests and so forth.
The project is self-funded, therefore granting the freedom to experiment and to decide without restrictions from other shareholders. According to the artist one bank approached her and showed interest in the project, but as they asked to put banners along the side of the boat, the artist resigned and chose to realize the project on her own. She did not want it to be used as a promotional tool.

As it was called ‘performance piece’ the stress is obviously on the performative, on the experience that you gain when you are around the two protagonists Lucy Wood and TO6411. When the artist refers to the boat she uses the pronoun “she”, thus putting emphasis on the personal bond they have build during the four months of their travels in 2013, but also proving that the found object TO6411 is regarded as an agent, that is to say a subject in its own right.
During the trip the sit-ins with locals from the 63 stops did not have to be particularly organized because she (TO6411) attracted and amazed passers-by that stopped and started a dialogue with the two memory agents.

What was especially surprising to me were the reactions that Lucy Wood recalled from the local authorities and involved groups on Lampedusa. Initially expecting encouragement or at least good will, the artist was confronted with unthought-of obstacles. For repairing works on the boat Wood would be charged ridiculous prices and when local groups threatened to burn the boat because of fear for the island’s tourism she had to sleep on it even before the journey had started.

Lucy Wood started exploring migrants and migration flows already in the late 1990s.
The name of the large-scale project “Distant Neighbours” is taken from Mexicans, who used it when referring to Americans, their vecinos distantes. The cumulative and constantly growing piece is planned as a visual book stretching over several projects/chapters over the course of more than one decade.
The first chapter is situated at the border between Mexico and the USA. For her research the dedicated artist moved to the ghost town Ruby, an old American mining town near the border. For the migrants, trying to overcome the border to enter the USA it takes about four days to cross the rocky and dry landscape.
After focusing on the desert in this first chapter, in her following chapters the artist worked with the sea, as a means of travelling and a transmitter of migration flows, which can be just as cruel as the desert.
When she started her trip in June Lampedusa was not so well known at all, which might be a reason for the discouraging reactions of the locals. But by October, when the tragedy had taken place, things suddenly changed. Lampedusa was reported on world-wide and the scope of Lucy Wood’s project seemed somewhat to urgent to be appropriate. Accordingly, the UK media changed their plans to report on the artist’s project due to the recent events. Only belatedly on the 18th of December 2013 there was an event with politicians and church leaders, which were invited by Lucy Wood to go down the Thames to Westminster on World Migrant Day on TO6411.

The boat will be at the South Dock Marina until April. Afterwards Lucy Wood will have her stored somewhere dry until she finds an institution or investor that is willing to take over responsibility.
Till then I want to use the chance and unique opportunity and organize another sit-in with students from Goldsmiths College especially from the course “Transcultural Memory” conducted by Astrid Schmetterling, during the course of which my project  on floating memory arose. The time and place will be announced soon. But it will probably take place on the 15th of March. The Idea is to meet TO6411 and Lucy Wood, to get an idea of the small boat, that initially housed 36 migrants and to start a conversation with the artist about her project and the role of the artist as memory agent in general.
Further details will be announced here.